I realized, now that I am growing older, that controlling what you eat during the holidays gets harder and harder. Not because you have no self-control, although I am sure that is a part of the problem, but because someone else might be doing the cooking or you may be cooking for people that don't enjoy the same foods as you do.


I am spending my first holiday in Charlotte with my mother's side of the family. Not to bad mouth the area, but when I see macaroni and cheese listed as a vegetable side-dish on numerous restaurant menus I begin to doubt the food sanity of those around me. Since I will be helping to plan and cook the Christmas day menu I thought I should share with you how I intend to get in as many winter vegetables and whole grains so that even the kids will eat healthy.

The first challenge I faced wasn't even the people, it was where to find the healthy food. The local Walmart is where the majority of my family buys groceries, but their produce is often limited. So after traveling to three different supermarkets I was finally able to get all of the produce I needed for dinner.

The second challenge was to cut the sugar, salt and fat. Essentially, most recipes that I found I simply cut the sugar in half, eliminated adding salt by using pepper or spices instead, and used low-fat milk and half of the butter or oil. Cutting things out of recipes won't always work (especially with certain baked goods), but most of the time you can cut back on salt, sugar and fat without overly altering the taste.
The third was to get everyone to try the food. (I avoided telling them that I had modified the recipes. Some may see this as unethical, but I think serving them the original recipes would be unethical). 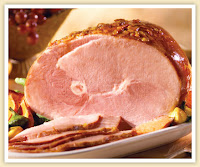 What was on your holiday menu?
Posted by Jessica McGovern, MS, RD, LDN at 10:01 PM